Adam is 22 years old. Like most young men his age, he loves watching his favourite football team and socialising with his friends. He also adores anything to do with music. You’ll often find him listening to jazz music or playing the drums and the guitar.

But unlike most young men his age, Adam has Allan Herndon Dudley syndrome. This is a rare brain development disorder that only occurs in males.

He also has severe breathing problems that require overnight ventilation and often has swallowing issues that means he has to be PEG-fed, receiving suctioning and is nil by mouth.

Life before our involvement

Adam needed extra support from the moment he was born. But while he attended a special educational needs school, healthcare professionals were puzzled by the root cause of Adam’s condition. It took a lot of tests and hospital visits before he was diagnosed with Allan Herndon Syndrome at the age of nine.

This was difficult to manage as a family, but even more so when Adam’s dad tragically passed away. Adam’s grandfather who lived with them helped for a while, but he also sadly passed away a few years later. This left Anne, Adam’s mum, to look after Adam and his care alone whilst also managing her own grief.

Anne said, “It was exhausting. I was having to be up all day with him and most of the night because Adam doesn’t sleep and often contorts. I had to give up work, so I had little adult interaction, and life became very fast paced for me.”

On top of this, Adam was in and out of hospital. His heath conditions mean he is more susceptible to chest infections and lung aspiration when eating. This continued after his PEG line fitted and he experienced several cases of severe pneumonia.

It was a lot to manage and Adam’s next lengthy stint in hospital would become the catalyst for change.

From reactive to preventative

A few years ago, Adam was in hospital for almost two years. After a scoliosis operation, he developed an issue where his bowels would collapse every five to six weeks. When this happened, he had to go into hospital to have his bowels drained. This meant he had to stop feeding and needed IV fluid.

This happened several times before the hospital decided this couldn’t keep happening. They suggested Adam begin total parenteral nutrition (TPN) feeding. This is a method of getting nutrition into the body through the veins while avoiding the bowels.

Anne said, “It was working fine, and I had three nurses that would do Adam’s TPN feed overnight. But one day he became seriously ill because of septicaemia in his TPN line.”

Adam was rushed back into hospital for treatment and to get a replacement line fitted. But during his hospital stay, he got septicaemia again. This prompted the medical team to remove the TPN line, and his nursing care package stopped.

But after two long years of lengthy hospital stays, it was evident Adam and Anne needed extra support.

A nurse practitioner at the hospital recommended the Children’s Complex Care team at Voyage Care as a solution to support Adam at home. As experts in oral and nasal suctioning, it was hoped we could help prevent Adam from aspirating, reduce his hospital stays and overcome his health barriers.

Adam receives 2:1 care and support from us throughout the day and night. This includes mobility support, pain management, ventilation care, PEG-feeding and suctioning.

To ensure Adam receives the best possible care, the Children’s Complex Care team at Voyage Care work closely with his GP and other healthcare professionals to manage the clinical governance of his care package, so his needs are always met.

As well as healthcare, we support Adam with his social and community needs. The team ensures he has his top ready for when Manchester United play and do lots of sensory engagement through arts and crafts.

We also help him to attend a community day centre. We support with escort during transport and ensure his safety whilst there, so Adam can socialise with his friends and enjoy days out.

Since your involvement, not only have you helped Adam, you’ve helped me too. You’ve allowed me to return to work, and offered some much-needed respite so I get a break as well.

Adam’s overhead hoist broke a while ago. Every time Anne tried to get it fixed, she was met with obstacles and this became quite stressful. This was not only impacting Adam, but also posed a real health and safety risk to those caring for him.

We stepped in to support Anne in contacting Adam’s equipment servicing team so this could be fixed as quickly as possible.

After Adam was discharged from hospital, he was determined to not let his health barriers impact his education. He returned to his school after a two-year absence and threw himself into his learning.

His dedication and bravery didn’t go unnoticed and the school nominated him to receive the Jack Petchey Achievement Award. This is an awards scheme run by the Jack Petchey Foundation for outstanding young people aged 11-25 across schools in London and Essex.

It recognises young people who have gone above and beyond to achieve – perhaps when others thought they might fail. And Adam was selected as a winner!

“I was over the moon and very proud because he had gone through an awful lot. I had doctors saying they’d done all they could for him at one point. So, for him to have overcome those health barriers and be happy, it was absolutely fantastic!” said Anne.

Since we’ve supported Adam, we’ve been blown away by his undeniable determination. Despite his health barriers, Adam refuses to let anything stop him from doing the things he loves the most.

Our main priority will always be to ensure Adam receives high-quality, personalised care for his needs so he can remain healthy. But we can’t wait to help him achieve his next goal, whatever that may be.

For more information on how we support children with complex care needs visit our webpage or to make an enquiry, fill out this quick form or contact our friendly enquiry team on: 0800 0353 776 or email referrals@voyagecare.com. 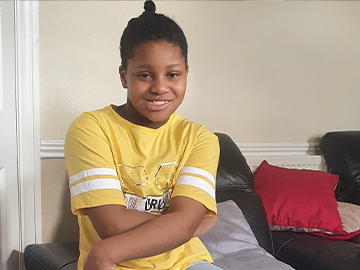 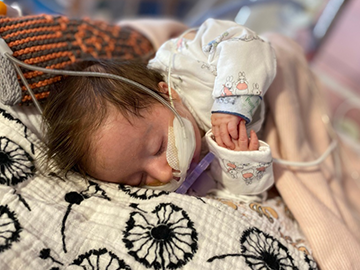 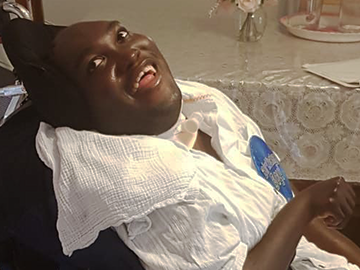 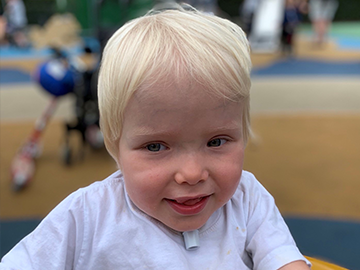 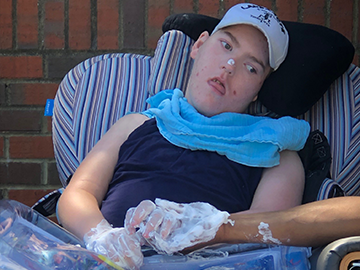 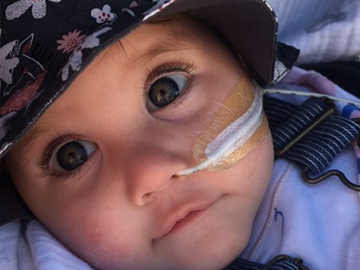